This product is available in our stores

You can buy this product without placing an online order at one of our stores in your area. Check where the product is in stock.
Check availability

The fabric of the Eagle Grips uses the micro diamonds technology. This probably doesn’t mean anything to you, but let me tell you what it’s good for:

To have the best grip that anyone has ever had with any pair of gymnastics grips;
To retain the chalk applied on the grips for longer.
Does this already sound much better?

The raised part of the micro diamond shape is coated with special rubber material making it into minute arrowheads, and together with its malleability (they fold so easily) this fabric will seem like the wheels of a 4×4 going up a mountain. Or like the jaw of a crocodile biting a tree! Who doesn’t want to improve their grip and increase the number of reps of any given movement? And better yet… it won’t test positive in any anti doping control!

The same shape of the micro diamonds ensures chalk gets trapped on the grip and works much like an extended release system, slowly releasing chalk as needed every time you grip the bar. So not only is your grip now much better, you will also save time on re-chalking, which will now happen less often giving you more time to work.

Better grip, less re-chalking, faster transitions between exercises… you will be the most efficient possible and at your best possible capacity thanks to the Eagle Grips!

“I’ve been last 9 months testing prototypes and first versions and for me there’s nothing similar. They’re thin, soft and the grip is…. awesome!”

“If I could… I gave them 7 stars! This grips made me a better atlete!”

How to choose the size of crossfit grips?

Check skin size in centimeters in the length of the hand (from the bottom edge to the beginning of the middle finger). Then adjust the measurement to the table above and choose your right size! 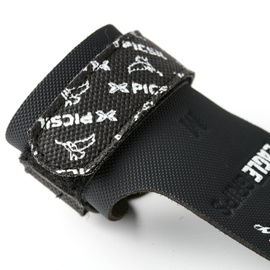 Users reviews
To rate this product or to add a new review, you need to log in.

Reebok CrossFit Workout Ready Big Logo Tight
24,47 €
Subscribe to the newsletter to receive 5% on purchase for the first order*